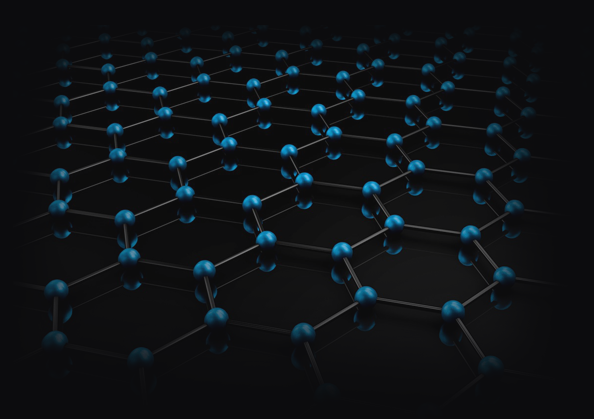 Graphene is made of carbon molecules that bonded with each other to form a honeycomb or hexagon shape in 2-dimensional, ultra-lightweight (with 1 square meter weighing around 0.77 milligrams), and extremely durable. It has one atom of thickness and is 1,000,000 times thinner than a sheet of paper, and which is why it is considered 2-dimensional.

Graphene is also known as a miracle compound; one of the strongest materials ever existed in the universe, the "Miracle" word is used to describe Graphene because the bond between carbon molecules has high flexibility despite being one of the strongest materials ever known. Thus, it can be bent or stretched to a certain extent without breaking apart.
What makes Kuro coating unique
among graphene coatings in the market
Multiple forms of Graphene were discovered ever since the discovery of Graphene such as Graphene Oxide, Reduced Graphene Oxide, Graphene Nanotubes ( Single Wall Carbon Nanotubes ) and Multi-Wall Carbon Nanotubes.

Each of the forms has different properties and Graphene Nanotubes is the perfect material for Kuro coating due to their compatibility, stability, and strength. TEVO is the only brand infused Graphene Nanotubes ( Single-Walled Carbon Nanotubes ) into the formula in the car coating industry.

According to scientific studies/research, the reduced graphene oxide cannot have the perfect graphene structure and there is always some defects and even though scientists try to reduce the graphene oxide. Thus, the material was never our choice for Kuro coating.

Lastly, TEVO is confident that Kuro coating will stand out even in the graphene coating market given the product quality.
Why TEVO choose Graphene Nanotubes
over normal Graphene
Single-Walled Carbon Nanotubes (SWCNTs) or known as Graphene Nanotubes and Graphene are two of the most recently discovered forms of carbon.

Graphene is in a 2D film like a sheet of thin paper which formed by countless carbon molecules in hexagonal or honeycomb lattice. On the other hand, Graphene Nanotubes are cylindrical, or a sheet of Graphene rolled into 3D tube form.

The differences between these two forms are marginal except each form is better in certain aspect. Graphene is very thin, flexible, and yet is highly conductive; it is widely used in electronic devices, and it will not be covered in this article. Meanwhile, Graphene Nanotubes are well known for extremely durable ( 100 times stronger than steel ) and super-lightweight; thus, it is commonly used as reinforce additives for space elevators, bulletproof wear, clothing and others.

One of the reasons why Graphene Nanotubes is better than Graphene because the material itself is compatible to almost all kind of material, can be easily incorporated into the base ingredient, and remain stable.

Hence, Graphene Nanotubes is selected to infuse with Kuro and strengthen the coating.
0